Sound Design Lab LLC was established in 2007 by the founder, Mr. Osamu Maeda. Our core business is designing the sound, developing and selling the software, and providing the technical consulting for the industrial products.

Mr. Maeda worked for Yamaha Motor Co., Ltd. as an engineer for many years, and during his employment, he studied noise reduction, sound quality and sound design of motorcycles. Through that engagement, he gained a wealth of knowledge and considerable experience of the engine and vehicle sound. That has made it possible for us to own the advanced proprietary technology, especially on the sound designing of engines and vehicles.

RealEngineSim (RES for short) is a car and motorcycle driving simulation application designed for iPhone, iPad, and iPod touch. With this application, you can enjoy the speed control and the engine sound of manual transmission cars.

RES has been made to introduce our technology and it is now available for free at APP STORE.

By operating the accelerator, the brake, the clutch, and the shift button displayed on the touch panel display of this application, the engine rotation speed and the vehicle speed will be changed momentarily and displayed on the screen. A steering handle and images of a road are not provided deliberately so that you can concentrate more on the speed control. This application is equipped not with a racing function to compete with other cars but with a speed tracing game function in which you are directed to drive a car at the specified speed.

The followings are some screen shots of this application. 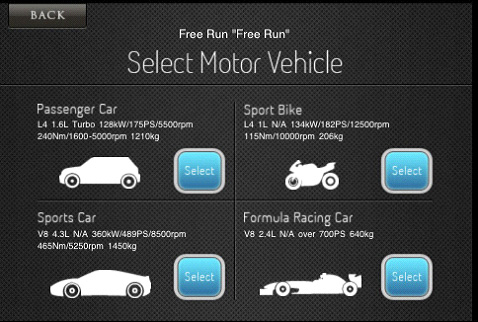 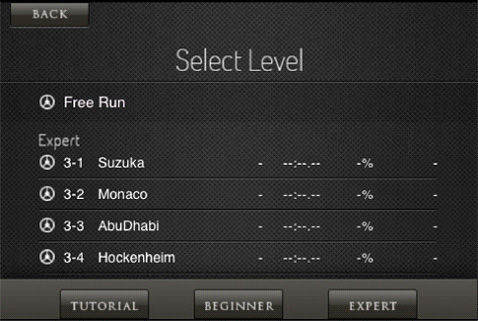 As for the engine and the vehicle, our program, which has been made based on the precise physical model, enables you to operate the vehicle as if it were the real machine. Moreover, this application lets you experience things like idling the engine or starting the vehicle by pressing the clutch for the first time in the history of the conventional racing game applications. The wrong operation of the clutch causes the engine stall. This physical model basically is used for all the vehicles in common and that you can simulate any kinds of vehicles by just changing the parameter value. There are four types of vehicles: a passenger car, a sport bike, a sports car, a formula racing car; are available for the current version.

You can see the video of playing RES here.

Vehicle Sound Simulator (VSS for short) is a simulation application of cars and motorcycles which you can operate on PC (windows & Mac). Its functions are almost the same with those of RES; however, in this application, you will use a mouse and a keyboard instead of a touch panel. Since VSS uses the high-end CPU of PC, the sound can be controlled finely according to each operation condition; therefore, it makes even more realistic engine sound than RES.

VSS was originally an in-house tool that was made to design the sound of cars and motorcycles, and then later on it was remade into an application for the purpose of the promotion of our technology. There are currently seven types of vehicles available including motorcycles as mentioned below. You can also see the video on YouTube. Although VSS is not in sale yet, we would like to consider the possibilities.

We call this synthesis method “SDL Method.” VSS synthesizes the sound by calculating the engine sound in real time on PC using this method.

SDL Method enables us to make the engine sound of any numbers of cylinders. It has also made it possible to make the sound of engine which has irregular intervals of combustion. Because the method controls the sound by each cylinder, it can synthesize the sounds even when those from each cylinder are uneven.

As for smart phones, because their CPU is not high enough, RES synthesizes the sound data, which VSS has made by synthesizing the several kinds of sounds in steady operation, by playing in a loop.

Therefore, RES has a bit less flexibility than VSS in the sound control. Even so, it can synthesize the more realistic engine sounds when compared with the conventional racing game applications.

Please contact us if you are interested in either our engine sound synthesis technology or the physical model of engines and vehicles. We can provide the charged technical assistance upon request. We can sell the programs also upon request.